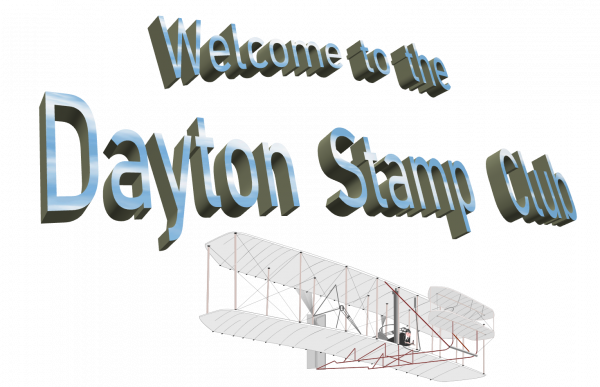 2022: The club voted that starting in June there would be a 30-minute networking session prior to the start of club meetings at 7:30 p.m. Among the benefits of the new schedule is that members will have more time to look over the circuit/approval books.

2020: The Dayton Stamp club goes virtual. Due to Covid 19, we have adapted and now have online Zoom meetings to keep our members in touch with what is going on. This has led to our club having guests who can now join in from around the world. Go to our calendar to find out about upcoming meetings and how to join.

2009: A letter was received from the Miami Valley Hospital Association in October, stating their appreciation for a donation to the medical library in memory of Dr. Frank Shively, who died at the age of 95 on Oct. 11, 2009. He was a long-time enthusiastic stamp collector and member of the club. For the 100th anniversary of flight, Dr. Shively created a Wright Brothers Stamp Exhibition for the club’s 28th Annual AIRPEX Stamp Exhibition, held Sept. 12-14, 2003 at the Dayton Convention Center. At the club’s November meeting a “discussion then ensued reminiscing about some memorable occasions with Dr. Shively, as well as anecdotes about his collections, in particular his Canadian collection.”

2005: The club noted the September 2004 passing of longtime member Don Emerick, a retired Ph.D. chemist who held patents for chemical processes as well as learning toys for children. “He was always kind of a quiet reserved man,” wrote club newsletter editor Martin Richardson in the January-February 2005 newsletter. “At club meetings he would often ask me rather interesting questions about detailed philatelic subjects. It was obvious to me he was an avid reader and a student of philately.” Richardson said that although he saw Emerick at stamp shows he never really knew what he collected until he was asked by the attorney managing the probate of Emerick’s estate to appraise his stamp collection. “Don lived in a small apartment amongst over 4,000 books, collections of lead figures, old electronic equipment, and 17th and 18th century armor. It required three visits and about 15 hours of work to go through it all.” Based on his experience with Emerick’s collection Richardson advised club members to strongly consider spending the time on maintaining an inventory of their collection. “As I went through this unorganized accumulation I uncovered gems every so often. One time there were a very fine 5-cent 1847 and another time a $5 Columbian.”

2002: More than 1,000 people visited the 75-member Dayton Stamp Club’s 27th annual stamp show Sept. 28 and Sept. 29 at the Dayton Convention Center. The lives and work of Wilbur and Orville Wright were featured in a large exhibit assembled by longtime club member Frank Shively. He presented a collection of stamps, along with postcards and other printed material commemorating the first flight. A lifelong area resident, retired general surgeon, and Wright State University professor, Shively had been collecting stamps for more than 50 years.

1992: A special feature of the club’s AIRPEX XVII was its selection as a first day of issue city for the 29-cent ATM self-adhesive Eagle and Shield stamp. Dayton Mayor Richard Clay Dixon attended, as well as Kathleen Boehm, the marketing and communication director of the U.S. Postal Service Cincinnati Area. The  ceremony was held at the Convention Center at East Fifth and Main streets. One of the activities offered at the show was a tour to nearby Sidney, Ohio to visit Linn’s Stamp paper and Scott Publishing plant, all part of Amos Press.e Museum WPAFB, Ohio .” The branch is no longer open.

1987: Jan Rudd, a United Way volunteer, and Howard Smith, the stamp club’s resident artist, developed a cachet that featured a drawing of the memorial gazebo following its construction on the grounds of Carillon Historical Park, where it was dedicated that summer as a tribute to United Way volunteers in Montgomery, Greene, and Preble counties.  The covers were serviced with the USPS 22-cent United Way issue and had the First Day of Issue cancellation of Washington, D.C. A second stamp and cancellation were added after the dedication of the memorial. Profits from the sale of the cover were used to support the Dayton Stamp Club’s annual Christmas program at the Children’s Medical Center. The covers were sold for $11.25 each.

1986: The City of Dayton Philatelic Society, formed in 1976 when some club members disagreed with the club’s decision to change the location and night for meetings, merged back into the Dayton Stamp Club, which accepted all the society’s assets. As part of the merger, the Dayton Stamp Club agreed to continue the society’s annual donation of stamps and albums to Dayton Children’s Hospital.

1986: AIRPEX XI was held Saturday and Sunday Oct. 11-12 at the Dayton Convention and Exhibition Center. According to Dayton Daily News stamps columnist Jim Nichols in his Oct. 5, 1986 column, there would be “2,500 pages of exhibits on display, showing how collectors can develop a particular theme in their collecting.” There was also a 30-dealer bourse with dealers from Ohio and seven other states, the Women’s International Air and Space Museum in Centerville also had a display, “Women in Aviation,” about the women who played an important role in aviation history and continue to do so. The U.S. Postal Service had a booth offering recent issues for sale. The Saturday afternoon presentation was “Linn’s at Work” by John Sicker of Linn’s. The featured presentation on Sunday was “Insuring your Stamps” by Danforth Walker, an APS Insurance representative.

1985: The Grand Award at AIRPEX X held Oct. 13 went to D. Scott Gallagher of Cincinnati for his exhibit of “Kentucky and Tennessee in the Civil War.” The Reserve Grand Award went to Wilbert Dahm of Chicago for his exhibit “U.S. Postal Service in China.” Gallagher’s collection included all the known Kentucky Confederate usages and also several of the only known examples of the Tennessee Postmaster’s provisionals. His exhibit later represented AIRPEX in the Champion of Champions competition at the American Postal Society Show in Washington, D.C.

1984: When the U.S. Postal Service announced the opening of a new branch at the National Museum of the Air Force at Wright-Patterson Air Force Base in 1984, club members sprang into action. Harry Harn, well-known first day cachet artist, designed a red and blue cover featuring the museum complex, which was printed by his Tudor House. The covers were cancelled on opening day, Feb. 8, with a double circle date cancel and the wording “U.S. Air Force Museum WPAFB, Ohio .” The branch is no longer open.

1981: After club members saw an article published in Stamp Collector magazine it was decided at the club’s Jan. 29 meeting to start a program whereby members would earn Stamp Bucks for various levels of participation in club activities. Club members receive the smallest amount, 5 stamp bucks, for bringing a guest to a meeting or submitting lots for a club auction. The most stamp bucks, 200, are given to members who serve as chair of the board, chair of the club’s annual AIRPEX event, create a club competition, or serve as publisher of the club newsletter. They have no cash value.

1980: The club’s board decided to take advantage for the first time ever of accepting the American Philatelic Society’s circuit/approval books. “We have not taken advantage of this benefit in the past, because of the logistics involved in receiving books, keeping track of who removes what from each book, the money and bookkeeping problems, etc.” members were told in the August  newsletter. Two club members volunteered to be responsible for the new program. “The final result will depend on the honesty of those buying stamps from the 20 or so different books which we will receive each month. If all goes well this should be a real benefit for all club members.”

1976: The club voted to leave its meeting space at the Bomberger Recreation Center at East Fifth and High Streets in Dayton and move to the Kettering Government Center on Shroyer Road. Meeting nights were also changed, from Tuesdays to Mondays. Some members disagreed with the changes and formed the City of Dayton Philatelic Society, which was affiliated with Dayton’s Parks and Recreation Department. The society was merged back into the Dayton Stamp Club, which accepted all the society’s assets, 10 years later.

1976: The Dayton Stamp Club held its first annual Philatelic Exhibition, Nov. 27-28, at the Dayton Convention Center. The event was designated DAYTON AIRPEX I. A special cachet honoring Prof. George de Bothezat, inventor of the first Army helicopter, was issued in conjunction with the show. The cachet sold for $1.50. The Dayton Daily News described AIRPEX I as “unique,” because it featured only Air Mail stamps and stamps honoring aviation.

1938: The Dayton Philatelic Society, forerunner of the Dayton Stamp Club, moved its meeting place from the Engineer’s Club to the YMCA in Dayton. The meeting night stayed the same, the second Monday of the month. Dayton’s preeminent architectural firm, Schenck and Williams, designed both the Engineer’ Club where the club had been meeting and the YMCA where the club moved to. Schenck and Williams are best known for designing Hawthorn Hill, home of the Wright Brothers that is today a designated National Historic Landmark open to the public. Among the club’s other big news that year was the success of a new meeting activity where each member was asked to display a page from their album or their favorite stamp or set of stamps and talk to the club for up to 5 minutes about why the stamp or stamps they showed appealed to them. According to Feb. 14 meeting minutes it was “one of the most interest packed meetings the club has ever held” and “an evening long remembered.”

This may be a good place to introduce yourself and your site or include some credits.